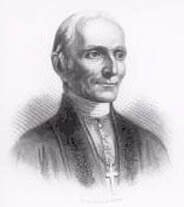 The Simon Bruté medal pictured above was fashioned from the official diocesan stewardship logo. This logo depicts the three stewardship “Ts” (Treasure, Time and Talent) presented in a way that looks like three people arrayed in a triangle. At the center stands the powerful symbol of the cross representing the core of the Christian Faith. The words “The Bruté Society” ring the inner design to symbolize that The Bruté Society members are, first and foremost, good stewards.